Mention Japan to visitors and there are many things that come to mind, from iconic attractions such as Mount Fuji and Tokyo Tower, to cultural symbols such as the traditional kimono and sakura flowers. While they all form part of what makes Japan, there is more to the archipelago than meets the eye. Here are just some of the unusual things you can find in the land of the rising sun, that make travel to Japan such a unique experience.

In 1958, Momofuku Ando of Nissin Foods created the first instant noodles – a creation which many Japanese consider to be the country’s best inventions of all time. In fact, they revere it so much that there are not one but two museums dedicated to cup noodles : one in Osaka and the other in Yokohama. These are far from your run-of-the-mill museums with static exhibits, as visitors will get to make their own ramen by hand and put together their own noodles (from the flavours to the packaging). There’s even a cup noodles park, designed as an interactive playground for children with noodle-themed attractions such as ball pits and slides.

Vending machines (jihanki) are big in Japan, and you are likely to find one at every street corner in major cities. Many restaurants have a vending machine outside where you can order and pay for your food, then proceed inside with a ‘meal ticket’ to collect your meal. 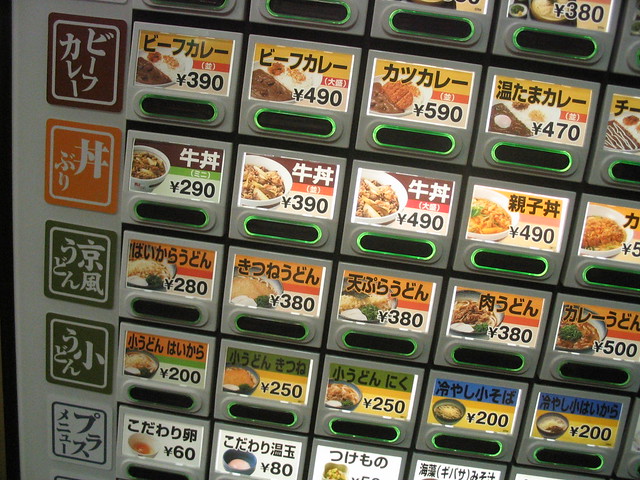 Taking it to a whole new level, though, is a shop in Gunma, a prefecture several hours north of Tokyo. Inside, visitors will find a number of retro vending machines as well as a microwave and change machine. The ‘menu’ is extensive, and you can opt for burgers, toast, tempura udon, ramen and sandwiches, among others. While it’s definitely not Michelin-star cuisine (and can be pricey to boot), the novelty alone makes it worth it for many. Food and drinks aside, there are also machines for toys and souvenirs. As there are no staff members to clean up, visitors are expected to clean their own tables and sort their garbage into the correct bins before leaving. If you’re not willing to travel that far, the Shimbashi train station in Tokyo has a similar setup, but with standing room only.

Drains With Fish In Them

A far cry from the rubbish-filled storm drains of Kuala Lumpur, the drainage canals in some parts of Japan are so clean, people keep koi fish in them. One such place is the peaceful and idyllic mountain town of Hida-Furukawa. The town has been attracting tourists since it was featured in the hit anime film Your Name, and its drainage canals, stocked with fat and colourful koi, are a sight to behold, set against a backdrop of traditional wooden homes as well as small and quaint-looking stone or wooden bridges.

There are about a dozen cat islands around Japan, the most well known being Aoshima and Tashirojima, where feline residents far outnumber its human ones. There are boats travelling to the islands, although the number of visitors allowed per day is restricted. If you prefer interacting with fluffy rabbits, there’s Okunoshima in Hiroshima, home to about 700 rabbits. Also in Hiroshima you can get up close to friendly Nara deer at Miyajima, a world heritage site which is famous for its scenic ‘floating’ torii gate and 12th century Itsukushima Shrine. Other notable spots are the Fox Village in Miyagi, and the hot springs in Nagano, where Japanese snow monkeys are often seen during the winter months.  Robo-World

Japan is known for its advanced technology, which permeates many aspects of their everyday lives – including food and entertainment. Kabuki-cho in Tokyo has a rather infamous robot restaurant, with android cabaret ‘girls’ that perform choreographed dance moves alongside human performers. The Miraikan (National Museum of Emerging Science and Innovation) is another good place if you’re into robotics, where you can meet Honda’s robot Asimo, one of the star attractions of the museum.