Some cultural aspects that South Korea is best known for include K-Pop, Korean dramas, traditional Korean architecture, hanbok (traditional Korean clothing) and popular Korean cuisine such as Korean barbecue and kimchi. However, the country has a wide range of tourist attractions to explore, including several unique hidden gems. Here are some places to visit for tourists who plan to go a little off the beaten path.

Opening a few years before the popular Lotte World did in the 1980s, Yongma Land, a neighbourhood amusement park in Seoul officially ceased operations in 2011. However, the abandoned theme park continues to attract many niche visitors today. The park’s owner charges visitors a modest fee to explore the park’s many rusty and dilapidated amusement rides.

There is a certain photogenic old-school 80s charm to the deteriorating carnival rides that attracts photographers and other visitors looking for something different to see in the South Korean capital. A few K-Pop video shoots and many independent photoshoots have been shot at Yongma Land over the years. The park owner may even switch on the lights of the ghostly merry-go-round for a few minutes after dark for an additional fee. Perhaps one lesser known aspect of South Korean culture is their strange fascination with – poop. Yes, you read that correctly. This is quite apparent in things like poop-shaped Ttongppang bread, toilet-themed cafés, poop-themed fictional characters and even an odd superstition that dreaming of poop brings good luck. Some Internet articles believe this unusual preoccupation with poop comes from the country’s early history, where the use of human waste greatly improved agricultural yield. Fast forward to today, visitors can explore an interesting attraction in Suwon known as Mr Toilet House or Haewoojae. The giant toilet-shaped building was the home of the late Suwon mayor Sim Jae-duck and is today open to visitors as a toilet museum, dedicated to raising awareness regarding hygiene and sanitation.

Malaysians may be familiar with a certain café in Subang Jaya that gained popularity recently for its unique interior design where everything looks like pencil-drawn art straight out of a comic book. The original café that it drew inspiration from is actually a quaint café in a quiet part of Seoul named Café Yeonnam-dong 223-14. Named after its own street address, the Korean café draws inspiration from the hit Korean drama W, in which the lead female character is sucked into a fictional web comic world that has become real in order to rescue the lead male character of the comic. Café Yeonnam-dong 223-14 moved to its current bigger space at the end of 2018 in order to accommodate more customers in light of its rising popularity and now has a cool rooftop space for visitors to hang out. However, do take note that only paying customers are allowed to take pictures there.

Jeju Island is better known for its natural attractions, with beautiful slopes for hiking, beaches and lava tubes to explore. However, the island is also home to a few quirky attractions including a teddy bear museum and a sex-themed sculpture park. One scenic man-made attraction of interest is the Jeju Glass Castle, a glass museum with colourful indoor and outdoor decorative glass installations. According to the official website, the group behind Jeju Glass Castle visited glass masters in renowned glass art countries such as Italy, Czech Republic and Japan in order to learn more about glass art and help to cultivate interest in the art in South Korea. Visitors pay a reasonable entry fee but may opt to pay more to experience lampworking, glass blowing or glass painting workshops and take home their very own finished glass product. 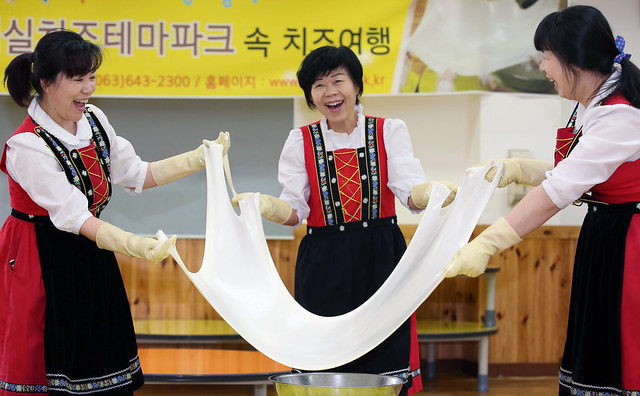 Cheese is not a food product people would immediately associate with South Korea, and yet it is home to a 32-acre park in Imsil dedicated to cheese. The peculiarity of the Imsil Cheese Theme Park has appeared in many web articles but there is an interesting story behind its history. In the aftermath of the Korean War, rural Imsil’s lands proved to be no good for farming crops. A Roman Catholic missionary priest from Belgium who came to the town started raising goats and making his own cheese. Taking notice of this, the governor asked him to teach the skill to the rest of the community, turning Imsil into the Korean cheese capital that it is today. In addition to its quaint scenery and fun playgrounds for children, the park offers workshops for making cheese products such as Imsil’s famous cheese, pizza and more. The location, however, is slightly out of the way and interested visitors will have to make their way to nearby Jeonju to catch a train or drive to Imsil.